NOTE:  in this section we want to share with you the history of Steenbeck.
In the near future we are planning to expand this section with more information with many old photos
old brochures and even footage of old films.

STEENBECK has a rich history of manufacturing film editing, viewing and controlling tables since 1953.
It all started with Mr. W. Steenbeck (February 25, 1896 – March 24, 1975).
First he learned precision mechanics at Kiel / Germany.
He went to Philips in Eindhoven/Holland and electronics became his interest.
After he returned to Hamburg he started  to study electronics.
At November 16, 1931 Mr. Ing. Wilhelm Steenbeck  established a company in Hamburg
manufacturing electronic components for the radio industry,
followed by a cooperation with his brother in law the company  “Harder & Steenbeck” which company
is still in excistence. He separated from this company and went on with a new company “W. Steenbeck & Co.”
at the Hasselbrockstrasse in Hamburg.

The company was specialized in manufacturing precision parts of gear wheels, parts for teleprinters (telex)
and small electric motors and was well  known for its quality of precision mechanics.
During WW2 Steenbeck was obliged to work for the German war industry manufacturing special parts for the
BMW aircraft engines and nautical test equipment. In 1943 the building was bombed and had to move to
the outskirts of Hamburg.
In 1945 after rebuilding the former building as well as possible the company came back into the city
of Hamburg.

In 1948 the first contacts were made to produce parts for film editing tables like FABAG, GEFAB later
F&H (Friesecke & Höpfner).
The first ideas to build  film editing tables on their own are from 1952. Mr. Günter Bevier came into the company
as a freelance engineer/constructor. Developments were made with the NWDR (Nordwestdeutschen Runkfunk)
and the TEBS (Televison Experimental Broadcasting Station) in Hamburg.
During 1953 the first Steenbeck flatbed 16mm 4 plate the ST200 was born.
This editor included optical sound and playback of 16mm perforated magnetic tape, a new media at that time.
The first Steenbeck editor ST200 was delivered on april 30, 1953.
Soon the ST100 followed, a 4 plate 35mm editor in 1954. Mr. Bevier also developed the first 16mm editor with
the possibility to playback/edit 17,5mm and 35mm perforated magnetic tape.
The first editor with back projection on a ground glass was the 35mm ST400 followed by the ST500 switchable
for standard and Cinemascope.

The first editors were delivered to the German broadcasters like NDR (Norddeutschen Runkfunk) and WDR
(Westdeutschen Runkfunk).
After the first 16mm and 35mm 4 plate editors came the 2 and 4 plate film rewinders.
At the same time he built the first compact 2 plate 16mm the ST1200 with optical sound, the so called Kobition,
a word Mr. Bevier invented.
This word means kombinierte bild tonabtastung, a name that still is in used in Germany.
Contracts with the German Broadcasters acted as certificates to other broadcasters in the countries around Germany.
The first export was made to the Dutch broadcaster NTS (Nederlandse Televisie Stichting) in Hilversum/Bussum.
The first 16mm / 35mm combination film editing table ST300 was developed with full exchangeable drive decks.
In 1956 the first export to the USA was made and in that same year the company moved into a new much larger
building at the Hammer Steindamm in Hamburg.

In 1960 Steenbeck presented the first dual picture film editing table with video camera adapter Teleduo 16 or 35,
an invention of in the meantime Ing. G. Bevier.
Now, mixing of two or more picture films was possible without film editing. The Teleduo was the basic development
for the later types ST926. This ST926 was again the basics for the ST928 and later the 16mm ST921 and
35mm ST721 (01-Series).

In 1965 the first electronically controlled editing tables for 16 and 35mm were manufactured.
Main control was made via the Steenbeck single selector switch at variable speed.
This was a decisive improvement for the film cutter. This single selector W (Wahlschalter) was put behind the type
name like ST700W.
The selector (speed switch) became famous.
The first two format film editors the so called 16/35mm combination tables were developed like the ST91 with a
fixed drive deck for the two formats including Cinemascope.
The later 16/35mm combination developments were the ST6040 (2 plate),  ST4000 (4 plate) and the ST6000 (6 plate).

THE 70’S
In the mid seventies the Super8 system for this combination type was  built to fulfill the demand from the
German broadcasters who were experimenting with S8 for news gathering.
Also in the seventies a lot of custom built solutions were manufactured as the ST3500 to check and view 4 Super 8
copies before tailored
Steenbeck editors set a standard for excellence and long live use. For this reason Mr. Steenbeck became
a Honory Fellow of the British Kinematograph, Sound and Television Society in 1973.

In 1975 Mr. Steenbeck died and the new manager became Mrs. Piele McCall, who already was working with
the company for 26 years at that time.  Mrs. McCall was managing director from March 1972 till May, 1985.
Her son Mr. Winni Bass became sales manager and he became managing director from June, 1985 till
August 30 2003.
From September 1, 2003 Mr. Hay Janssen became C.E.O. and owner of Steenbeck.

A measure of the universal acceptance of the Steenbeck concept of film editing can be judged by their
success in securing contracts to equip the film cutting rooms of the various Olympic Games.
Since the system of  ‘official suppliers ‘ to these events was introduced Steenbeck have been the principal
supplier of the 1972 Summer Olympic games in Munich, in 1976 Montreal, in 1980 Moscow and the 1980
Winter Olympics in Lake Placid.

In 1975 a new era of film editing tables started with the development of the 01-generation by Mr. Ing. G. Bevier
this with considerable improvements in picture and sound quality.
The 18-faced polygon produced an up then unknown picture quality.
The picture was by far brighter, clearer and practically without flickering.
A modern amplifier system with integrated circuits gave HiFi sound quality enabling the cutter to mix sound
at a high standard.
Also the demand for more speed during editing became able with the 01-Series.
The first 01-Series were delivered in 1978.

In 1978 Ing. G. Bevier left the company and after a while he was succeeded by Ing. Ernst Becker.
In 1980 more than 15.000 Steenbeck film editing tables were in use worldwide.
The range of Steenbeck editors reached from the compact 16mm 2 plates Kobiton to the 8 plates
(2 pictures – 2 sound tracks) editing table for all film and sound formats, Super8, 16 and 35mm,
standard and Cinemascope film.
Steenbeck set a standard in the broadcast and motion picture industry and many competitors utilized
the considerable advantages of the Steenbeck editing table for their own technical developments.

In 1982 the increasing of use of video films called for machines to edit picture and sound while saving time.
Steenbeck developed a video sound postproduction machine with rigid interlock between a standard video recorder
and a sound editing table being a compact unit.
This editing machine allowed sound editing and post synchronisation in a usual manner, like the Videoreporter ST201V.
Through the eighties the range of machines increased by editors for SEPMAG recording and multichannel sound recorder/player followers/dubbers of the ST7200 Series.
Through the late eighties  and beginning of the nineties still many improvements, mainly electronics were made
but this was also the era the video became stronger as a news gathering media.
The Super 16mm format was a new development for high quality and film stock manufactures came with an
excellent camera negative film.

NOWADAYS
In 2003 Steenbeck moved from Hamburg to Venray in Holland.
Mr. Hay Janssen became the owner of Steenbeck BV (same as GmbH / Ltd.) and is up today the general manager
of the company.
The 01-Series is still manufatured some types even in the 9th mark/version since development by Mr. Ing. G. Bevier.
Classic film editing continues to drop specially 16mm.
The film archives became more and more important and Steenbeck started new developments for these archives
in late 2005.

The first New Line Series 35mm was presented at the IBC in Amsterdam in 2010.
Main features of the New Line Series are fast replaceable sprockets for shrunken film, new generation
processor motor regulator board, digital sound reproduction with touch screen, new counter board and display,
built in rewinder, variaspeed and complete new editor design and modern colors.
In 2011 the first New Line Series 16mm was ready with the same possibilities as the 35mm series.
In the same year Steenbeck presented the ST822, an editor for Super 8 and Regular (N)8 film with COMMAG sound
for both formats, 2 channels for S8, 1 channel for R8.
Interesting features are a built in varia speed and film rewinder.

In 2013 Steenbeck is manufacturing film editing tables for 60 years.
(The first machine the ST200 delivered on April 30, 1953)
For this reason Steenbeck develop the JUBILEE SERIES based on the well proven 01-Series editor with very
interesting updates and features.


FUTURE
Steenbeck will keep on producing film viewing and controlling editors to meet the demand of the
contemporary field of film expertise; connectecting the analogue systems with the newest digital
available applications .

Brochure from the past: 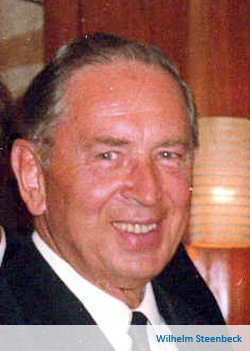 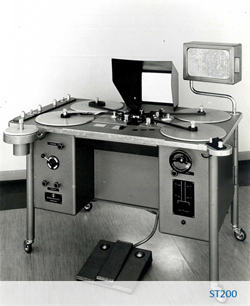 STEENBECK offers a wide range of film viewing and controlling tables for almost any demand in film archives or film restoration facility. If you are planning any new developments in your facility please feel free to contact us.
You will notice that any of your request will benefit significantly from our many decades of experience and we can work out any project to fit your requirements.
Also for a limited budget we are able to find solutions with good used or reconditioned units.
We carry out maintenance world wide by ourselves or through dealers.